Here are the poker hand rankings, listed from lowest to highest:

When there are no other poker hand combinations, the highest ranked card determines the strength of the hand. In the event of a draw with another player, the next most significant card, which is called the kicker, is used to determine the winner. Suits don’t matter. 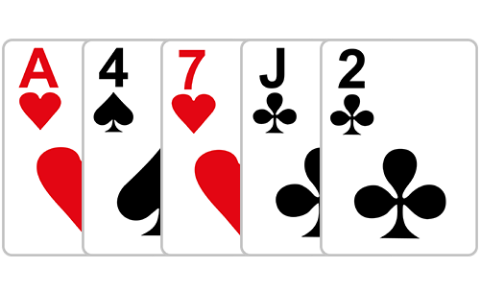 Two cards of the same denomination, if there is a draw, the kicker is used to determine the winner. The highest-ranked pair wins. Suits don’t matter. 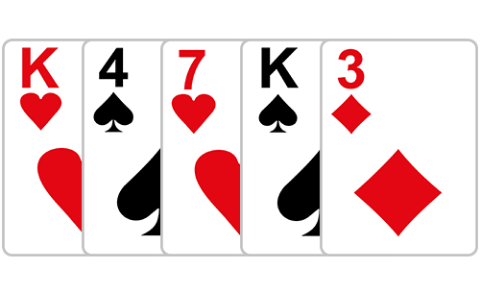 Two sets of pairs, if two players have the same pairs, the highest kicker wins. The suits don’t matter. 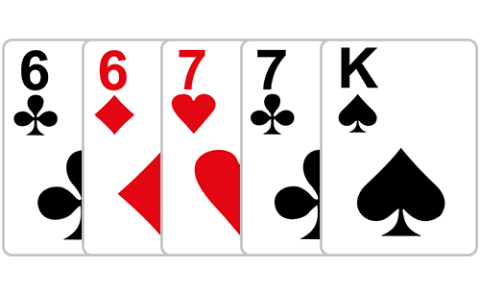 Three Of A Kind (Trips)

Three cards of the same denomination, kickers are used to settle a draw. The suits don’t matter. 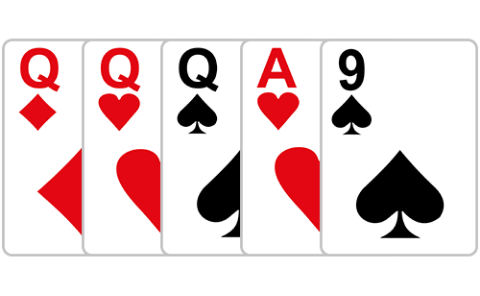 Five cards in sequential order, the suits don't matter. Ace is counted as 1 in the event of a low straight and is the only card that can be used both high and low. 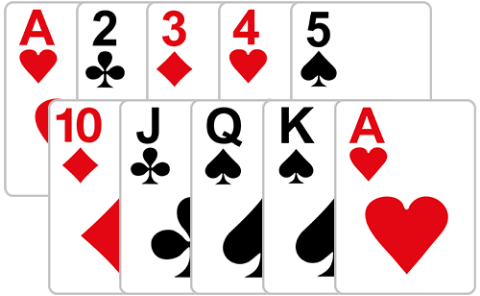 Five cards of the same suit in any order, the numbers don't matter. There are four suits, diamonds, hearts, spades and clubs. 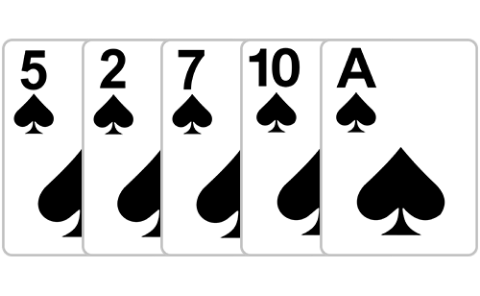 Three cards of the same denomination along with two of another, a combination of three of a kind and a pair. The suits don’t matter. 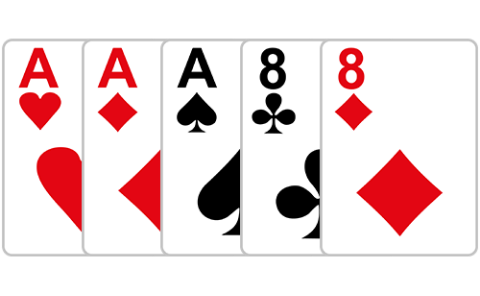 Four of A Kind (Quads)

Four cards of the same denomination, the suits don't matter. 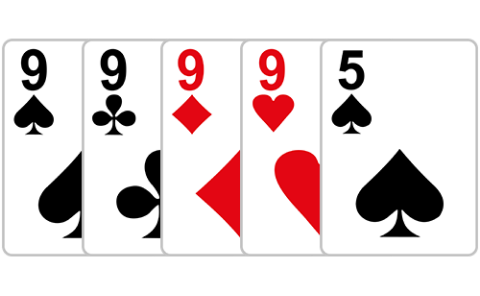 Five cards in sequential order that are also the same suit. A straight flush is a combination of a straight and a flush. 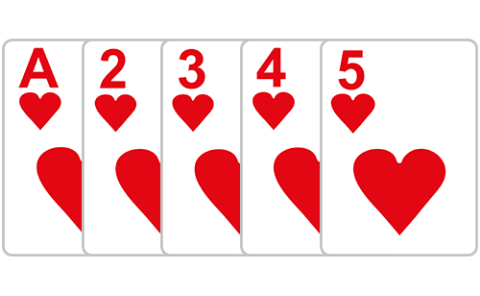 The royal flush is the only unbeatable hand in poker. It must consist of a 10, Jack, Queen, King and Ace of the same suit. A royal flush is a combination of a straight and a flush, with the added stipulation of being a high straight.

There are four suits in a deck of cards—Hearts, Diamonds, Clubs and Spades, with 13 cards of each suit. Suits are generally abbreviated as

Some games assign a hierarchy, but in poker, the suits don't matter and are only relevant for making flushes, straight flushes and a royal flush.

Two aces are by far the best starting hand for Texas Hold‘em. Pre flop they are unbeatable, and overall they have a roughly 80 per cent win rate. Generally, they are a 4 to 1 favourite over most other hands. Statistically, players should get pocket aces at least once every 221 hands. 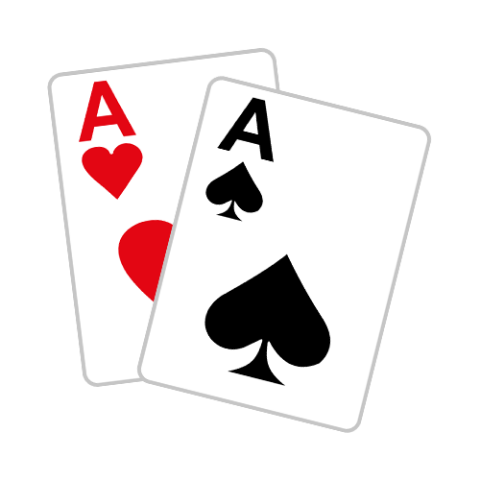 Coming in at a close second are a pair of kings. Pre flop, they are the favourite against any other hand, except pocket aces. Kings have around a 75 per cent win rate. 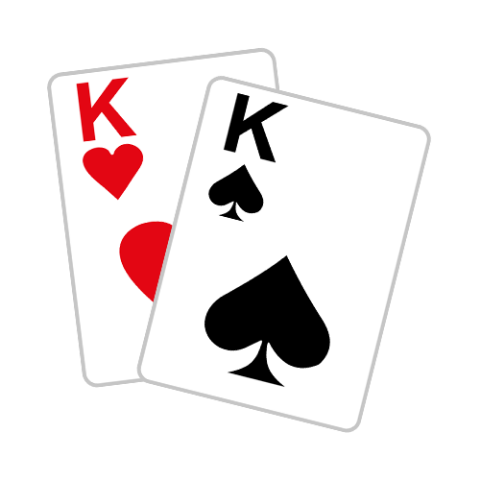 A pair of queens will beat the majority of other hands pre flop, however, the chances of winning start to go down on the flop, turn, and river. 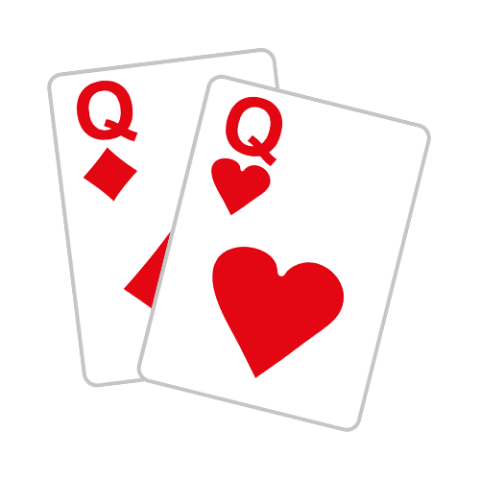 Pocket jacks are number four, while they aren't a top pair, they are certainly enough to get you the win. Jacks win around 20 per cent of the time. Obviously keep an eye out for larger pairs, straights, and flushes. 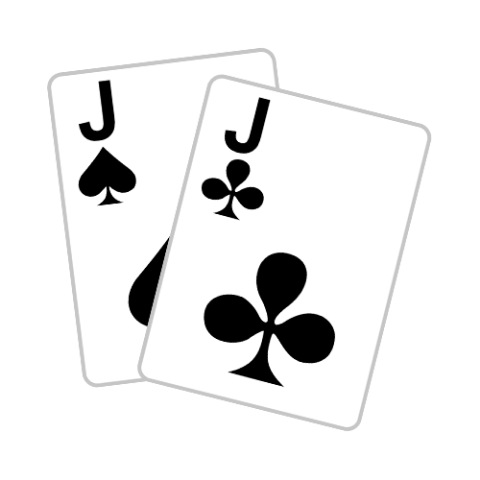 Ace, king is one of the strongest drawing hands and has a decent win percentage. Ace, king suited is the best possible version of this hand because it opens the chance for flushes. 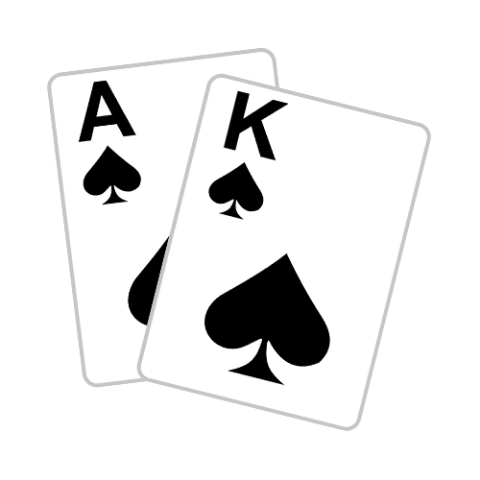 A solid starting hand, but very tricky to play if there are picture cards in the flop. They are strong enough to win on their own and are great for the turn and river if the betting is low. 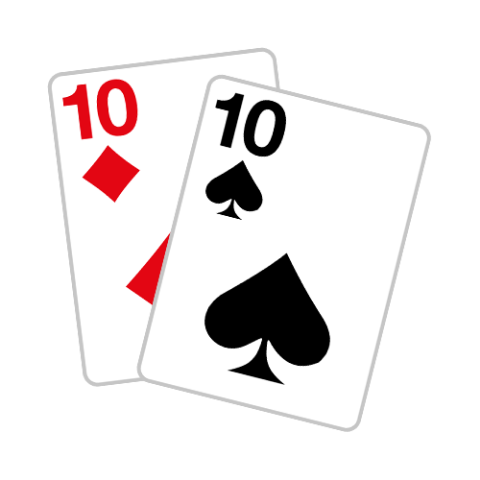 Ace, queen suited is another strong drawing hand and will win roughly 20 per cent of the time. 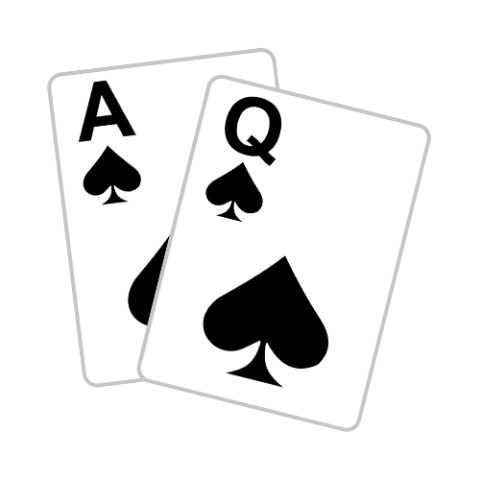 Another good drawing hand, especially if suited. Has excellent opportunities to make a straight. Keep in mind that any ace, king or ace, queen combination will beat you if an ace comes out. 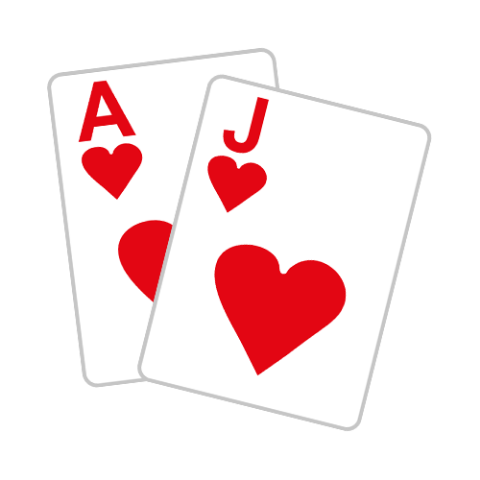 King, jack, especially in later positions will win around 19 per cent of the time, while unsuited it drops to 15 per cent. 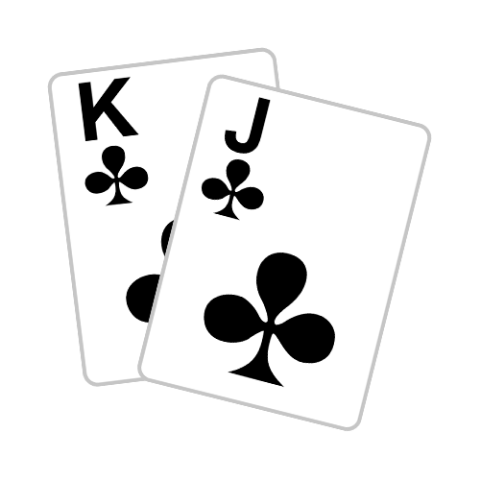 Pocket nines is a reliable pair that is ideal for later in the game if the betting is low and you are last to act. 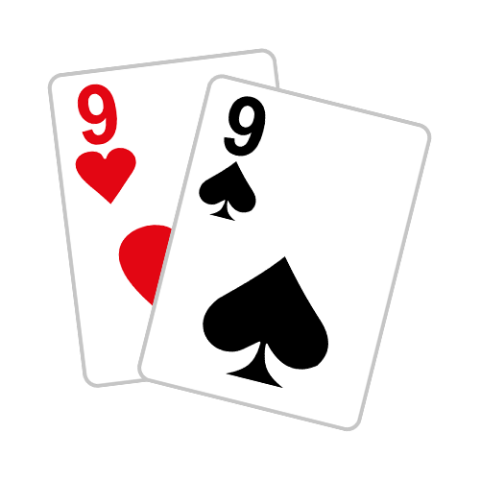 In Omaha poker, players receive four cards at the start of the round and two must be used along with three out of the five community cards. There are roughly 270,725 possible starting combinations for your four hole cards, including the suits. Nearly all the best starting hands are two pair, or have at least one strong starting pair. 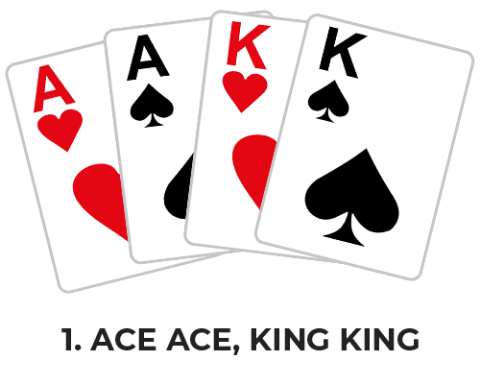 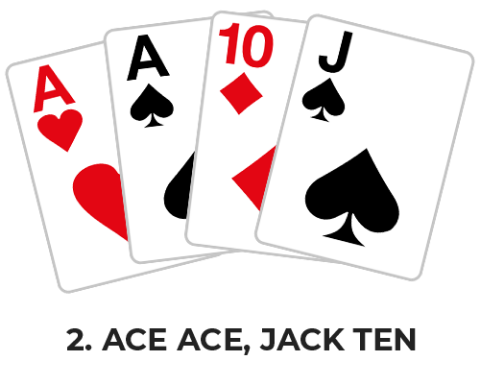 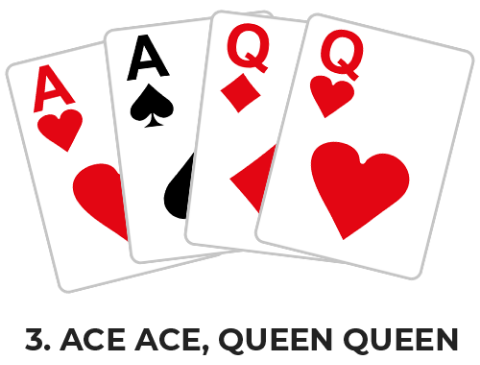 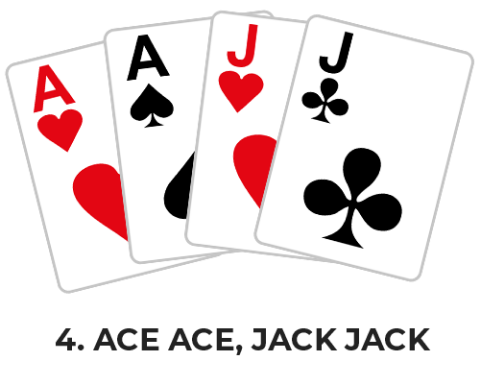 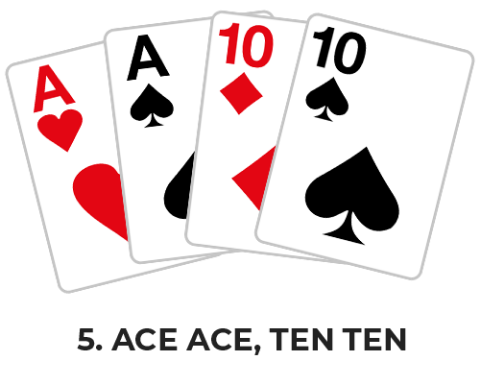 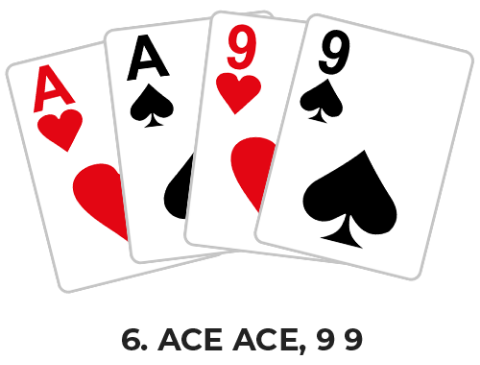 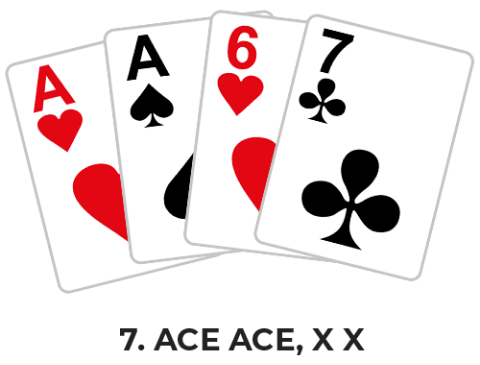 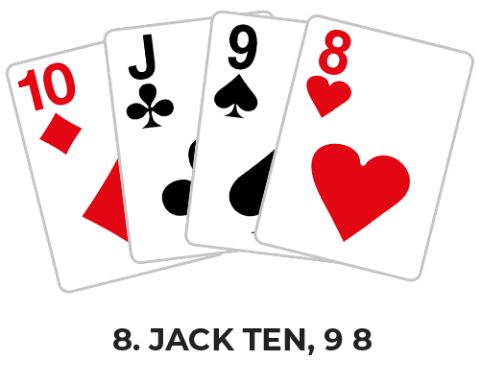 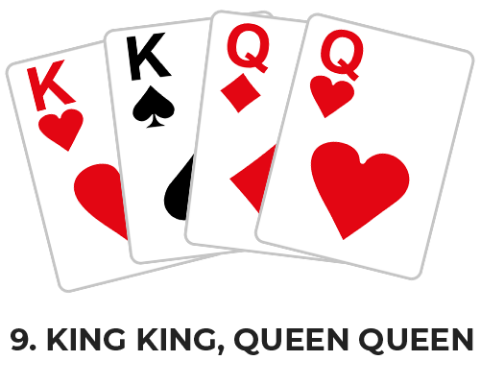 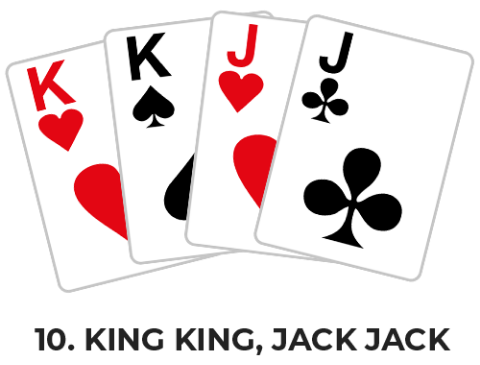 What Are Pot Odds?

Pot odds are the ratio between the size of the total pot and the size of the bet. For example, if there is 2 in the pot, and the player before you bets 1, your pot odds are 3 to 1, because you have to bet 1/3 of the pot for a chance to win it all.

What Are Implied Odds?

Poker hand implied odds are an estimation of how much you can win from a bet. For example, if your opponent bets 20 into an 80 pot, your pot odds give you 5 to 1, meaning, you’re risking 20 to win a possible 100.

Probability deals with the likelihood of one outcome over another. The most straightforward example is the flip of a coin, there is a 50 per cent chance it will hit tails, and a 50 percent chance heads will come out. Probability is the easiest way to calculate the chances of a card coming out.

A deck of cards has 52 cards, four suits, and thirteen total ranks, all the number cards plus the face cards, 2 to king. The odds of getting dealt an ace first up would be 1 in 13, while the odds of getting a heart are 1 in 4. Every card dealt changes the probability. If you receive a king first up, the odds of receiving another are 3 in 51 or roughly 5.9 per cent.

Poker hand rankings can vary depending on your game of choice. However, in these 3 games the hand rankings stay the same, and arguably are the most widely played poker games. 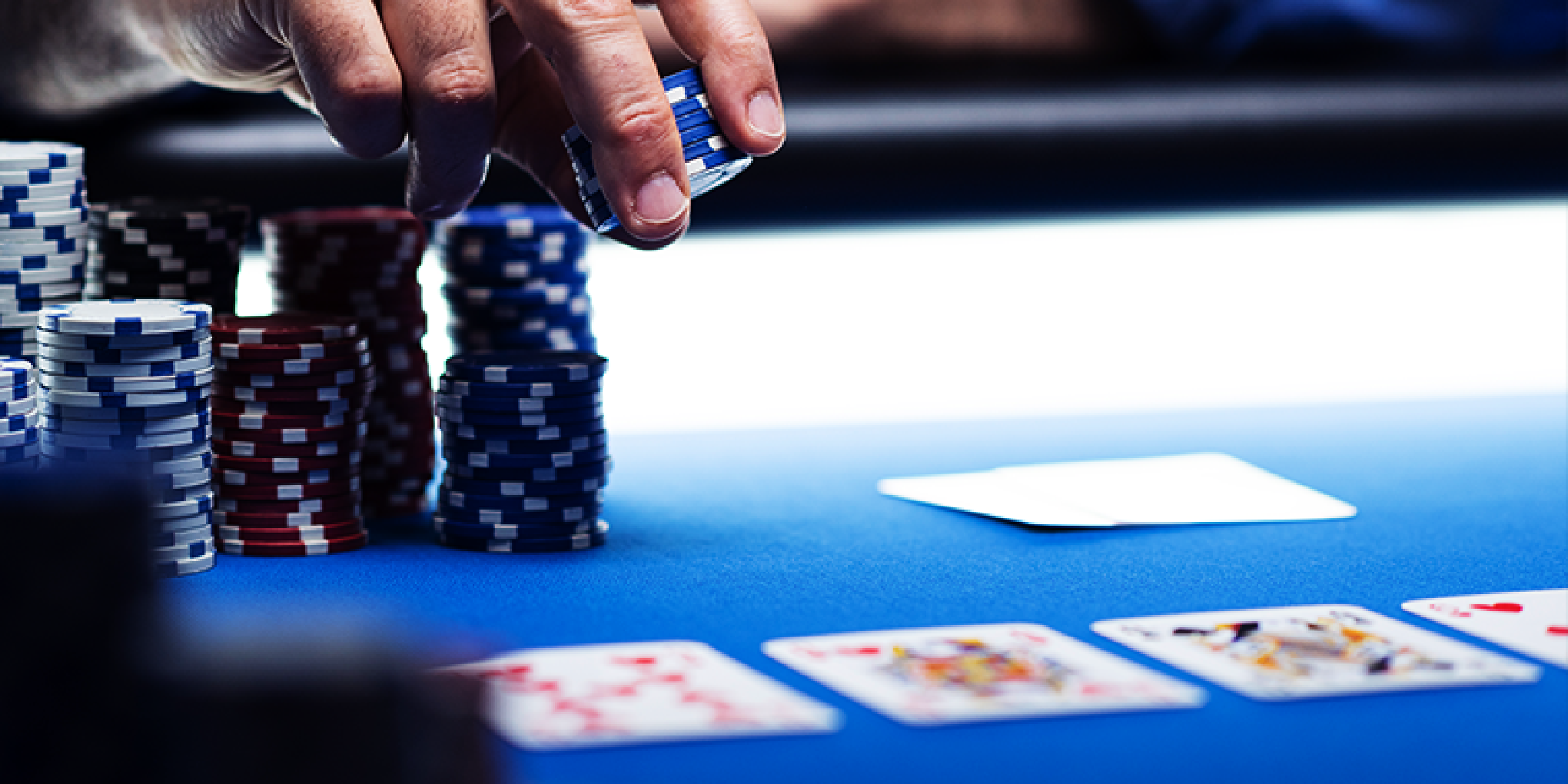 Texas Hold‘em is arguably the most famous poker variant. It’s played by 2-8 people, and the aim is to get the best five-card poker hand. Players can use the two cards they are dealt, the five on the board or any combination of the two. There are four main phases.

Flop: After everyone has acted, the dealer burns one card, places it face down on the board and puts three face up.

Turn: Another round of betting occurs. Then the dealer burns and turns one more card.

River: At this point in the game, there are four community cards on the table, a card is burnt, and another is placed in the middle making a total of five community cards. After this stage, no more cards are dealt, and there is only one more round of betting before everyone still in the hand shows their cards in the showdown.

If at any stage someone is eliminated, the next player to the left of the small blind goes first. The order in which players reveal their cards is determined by the order in which they act.

Pre-Flop: The game starts with everyone getting one face-up card; the player with the highest gets to be the dealer. The blinds are posted next; then the cards are dealt, each player receives four. A first-round of betting occurs, where players can raise, increase the current bet, call, match the bet, or fold.

Flop: After the pre-flop betting is resolved, a card is burned and another three are placed face-up as part of the first three community cards. Another round of betting follows, and players get the same three choices, raise, call or fold.

Turn: One more card is burned, and another is placed in the middle. A round of betting follows, and players get the same three choices, raise, call, or fold.

River: The river is the final phase. One more card is burnt, and the last community card is placed in the middle. This round of betting is identical to the previous ones. At this stage, if more than two people are in the hand, then they go to the showdown and players reveal their best five-cards, using two from their hand, and three from the table.

The first to act in a game of Stud is usually the player with the highest-ranked hand showing. Pairs, three of a kind and quads count in their regular order, incomplete straights and flushes don't. If there is a tie, it is usually solved via the kicker. The player with the lowest visible card also must place a compulsory bet called the 'Bring in', this can be used in conjunction with, or instead of an ante paid by every player at the table.

Five Card Stud: To start, everyone places an ante in the pot and the player with the lowest ranked card has to pay a 'Bring in' wager. Then everyone is dealt one card face down and another face-up, this is followed by the first betting round.

Next, each player is dealt a third face up card and another betting round follows. Surviving players are dealt a fourth card, and another round of betting follows. Everyone who hasn’t folded yet, receives a final card and the last round of betting occurs. Whoever is left, reveals their poker hand in the showdown and the highest-ranked wins the pot.

Seven Card Stud: Players receive a total of seven cards throughout the game and can pick the best five to make up their hand. At the start of the game, everyone posts the ante and receives three cards, two face down and one face up. The player with the lowest card showing has to pay the 'Bring in' wager, and play continues clockwise to the next player on the left.

A sixth card is dealt face-up, and whoever has the best face-up card gets to act first, play continues clockwise around the table. Everyone still in the hand gets a final card face down, and the player with the best face-up cards gets to act first, once again, play continues clockwise. After this betting round, anyone left enters the showdown and reveals their best five cards. In total, players get two cards face down, four up and then one final down.

When two players have the same hand, the next highest card is used to decide the winner. If both hands are equal and a decision can’t be reached, it becomes a split pot. The pot is divided equally between the two players. If there is an uneven number of chips, the player closest to the left of the dealer gets the remainder.

Hand One is the winner, both have a pair of aces, but Hand One has an 8 kicker which outranks the rest of Player Two’s cards.

Players can choose to muck their cards in certain circumstances. If you are second to act, and your opponent reveals a stronger hand, you can discard your hand without revealing your cards. Mucking can be useful for players wishing to hide their play style. In an online environment the button will flash up if it’s an option.

An ace-high straight flush—known as a Royal flush—is the best possible hand in most forms of poker. The odds of getting it sit at around 1 in 649,740, which is why many casinos offer a bonus to any player who gets one.

Depending on the variant, generally the best hand is anything with two or more aces.

Nearly everyone will agree that 2, 7 of different suits is by far the worst starting hand for Texas Hold’em. There are very few options available with a 2,7 off suit, there is no straight draw, no flush draw, and even if you end up with a two pair, it’s still likely to lose.

The short answer is yes. Regardless of the poker variant you are playing, being in too many hands is always a bad thing. Pick your spots, wait for decently ranked hands and try to avoid bluffing too much.

No, however, most of the popular poker variants all follow the Texas Hold‘em hand rankings, including Stud Poker and Five-Card Draw. If you only want to learn one set of hand rankings, focus on this one.