THE STORY BEHIND THE WORLD-FAMOUS DOGS PLAYING POKER PAINTINGS

Dogs Playing Poker is a collection of iconic paintings that are instantly recognizable, more so than the artist—Cassius Marcellus Coolidge—who has largely been forgotten as the painter behind the images. The works have been referenced in films, television, and have seen plenty of cheaper knockoffs made for tourist knick-knacks. Coolidge wasn't the first artist to feature anthropomorphized animals in his artworks, but his dog paintings have seen his work fondly remembered and displayed proudly, even by people who know nothing of the story behind the world-famous images. 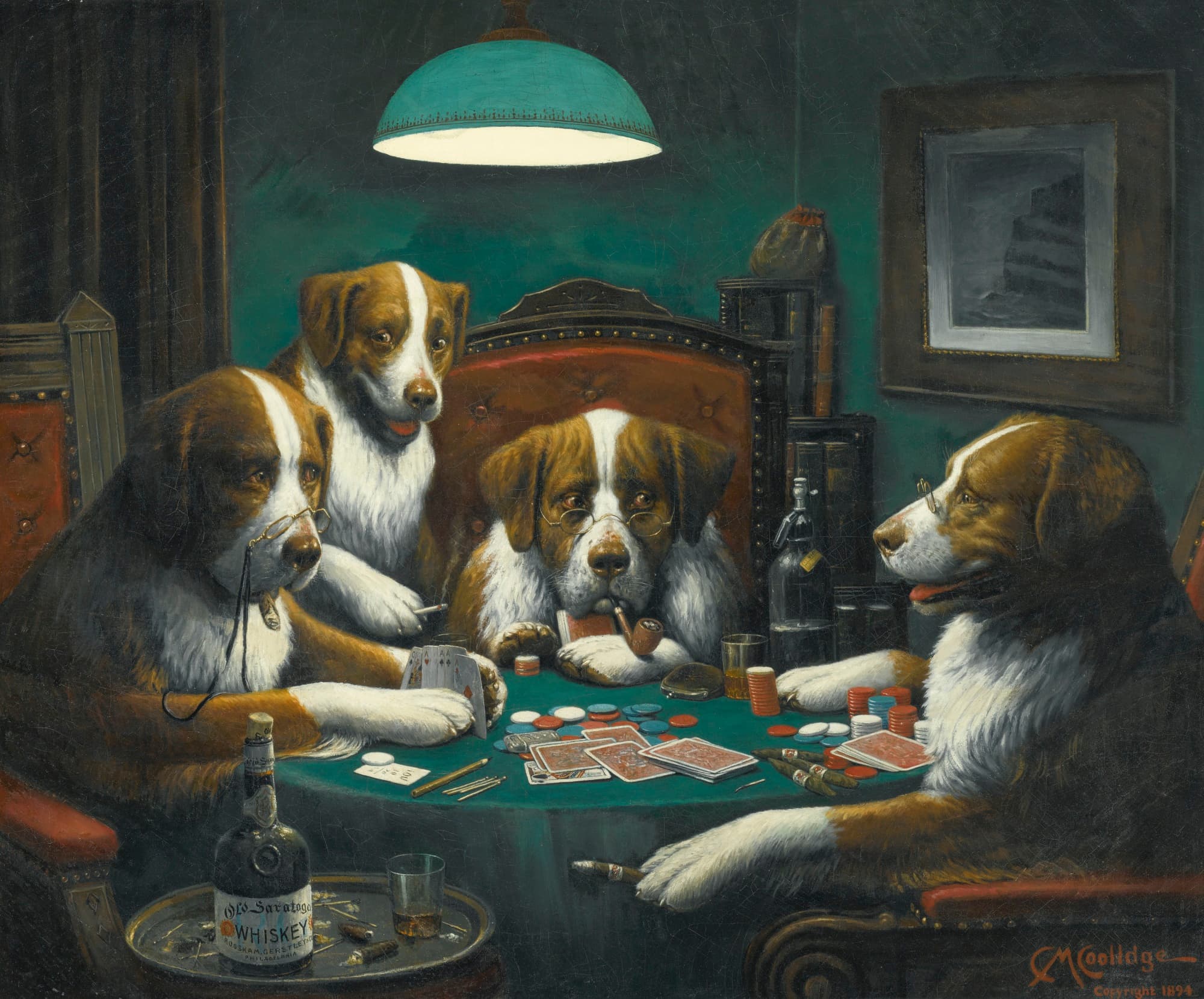 Most people will have seen Cassius Marcellus Coolidge's famous painting, A Friend in Need, depicting a group of dogs playing poker, with a sneaky bulldog up the front pawing a card to his neighbor. Interestingly, it’s actually part of a series called Dogs Playing Poker. There are 18 artworks in the set, with the first painted in 1884, and titled simply Poker Game, which depicts a group of St Bernard’s sitting around a poker table playing cards.

There is no reliable record of why Coolidge decided to feature dogs so heavily in all his art, especially when his wife and daughter went on the record as “cat people.” The leading theory is he was inspired by other artists such as Georges de La Tour, Michelangelo Merisi da Caravaggio and Paul Cézanne.

All three had their own artworks depicting a card game scene; however, they used humans as the subject rather than dogs. Comparisons have also been made with English artist Sir Edwin Landseer's Laying Down the Law, painted in 1840, which depicts dogs acting as lawyers.

In 1903, long after the Poker Game painting came out, Brown & Bigelow, a publishing company, commissioned Coolidge for 16 more oil paintings depicting anthropomorphized dogs. The series featured several more poker scenarios, but despite the name, quite a few of the artworks also feature dogs engaging in other activities, such as football, going on a road trip and playing baseball. Classic American pastimes.

Two of the paintings also contain a narrative. In A Bold Bluff, a Saint Bernard has bet on a pair of deuces, and it's up to his opponents to act. In another artwork, Waterloo—completed the same year as A Bold Bluff—the other dogs are seen snarling at the Saint Bernard as he rakes in the large pot. (We’ve all been there, haven’t we?) The images were eventually used for calendars, posters, and other promotional purposes to advertise and promote cigar sales, and have been held up as an excellent example of kitsch, or low-brow art.

The public has responded positively to the series, because let's be honest, who doesn't like dogs? (Umm, cat people?) Coolidge's art found its way into millions of homes, much to the disgust of art snobs and critics. The works have never received much praise from the so-called elite, but that hasn't stopped them from fetching hundreds of thousands at auction. In 2005, two of the paintings sold for nearly $600,000, and the original, Poker Game, has been valued at over a million dollars.

Cassius Marcellus Coolidge was born on September 18, 1844, in New York. He had no formal artistic education, but that didn't slow him down, and he started selling his drawings to a variety of different magazines at the age of 20. Often signed Kash Coolidge—a nickname his family used for him—his early artworks didn't receive much attention.

Coolidge worked in many different industries over the years. He was a banker, worked at a newspaper and a pharmacy, but his true passion was art, a craft to which he went to great lengths to pursue and improve. He travelled frequently and painted what he saw. Eventually, he developed a reputation as a top-notch animal illustrator, and he became highly sought after, especially for children's books.

At some point, Coolidge developed an interest in painting dogs in human situations, which would eventually turn out to be his most famous works. Just over ten years after he unveiled his first Dogs Playing Poker painting, he was commissioned by Brown & Bigelow for their new cigar campaign.

Coolidge would create 16 paintings in total for the company depicting dogs in various comical situations. The joke artworks quickly gained traction with the public. Within a few years, his Dogs Playing Poker paintings were offered as prints named Life in Dogville, which came free with every purchase of cigars from Cohen & Baker Cigar Co. At this point, one of Coolidge's original dog artworks sold for $3,000, which was a massive payday in the early 1900s.

Among his other achievements was creating the concept of comic foregrounds—novelty photographs that combined people with a caricatured body, which developed into the cartoon murals seen at carnivals and shows that people can stick their heads in. Coolidge died in 1934 at the age of 89; his obituary read, "He painted many pictures of dogs." Cassius Marcellus Coolidge might not be a household name, but the artist's dog paintings have certainly become some of the most recognizable in the world. 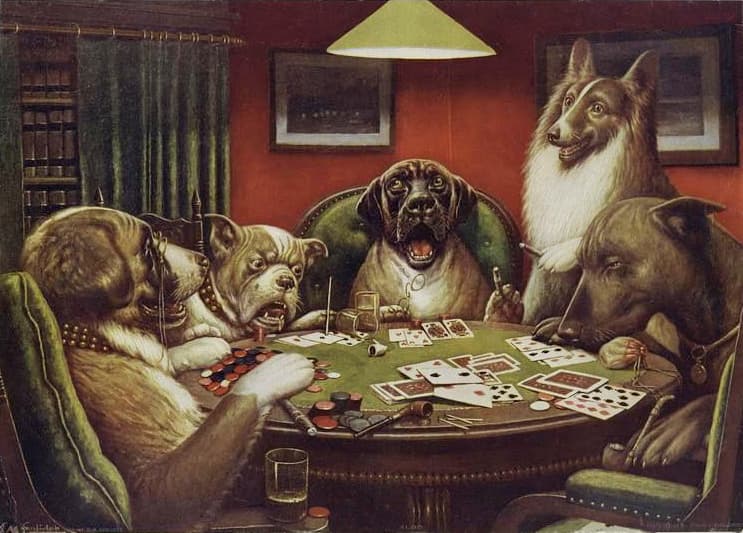 Coolidge's oil paintings of dogs playing poker have stood the test of time and been featured in mediums that he could have never dreamed of. TV shows like The Simpsons, and That 70s Show have had episodes centered around one or more of the paintings. They've been referenced in multiple Pixar films, comics, music videos, video games, and probably the funniest of all, in a song by top-dog rap legend Snoop Doggy Dogg.

Along with the frequent pop culture references, the Dogs Playing Poker series has been reproduced countless times. Smaller prints of the paintings can be bought on plates, puzzles, clothing, tapestries, and many other mediums. They have also inspired other artists, who have created their own versions of the iconic images, replacing the dogs with politicians, cats, or another stand in animal.

When Cassius Marcellus Coolidge first painted his series in the early 1900s, he couldn't have anticipated his works would still be talked about over a hundred years later. His wife and daughter were unimpressed, as were many art critics, both past and present. However, the public has always shown a great appreciation for these novelty artworks, even if they don't remember the artist's name; in some cases paying hundreds of thousands of dollars for the honor of owning an original.

In Philadelphia, where Coolidge was raised, a one-room museum at the back of the local library has a framed print of one of his works from his private collection. The image was gifted to the town in 1991 by his then 80-year-old daughter, Gertrude Marcella, who was happy to help preserve her father’s legacy.

Dogs Playing Poker has been studied at length and has been suggested as a satire of the upper class in their excesses and attitudes, a critique of sexism and a number of other themes. Others suggest the paintings were simply Coolidge having a bit of fun and looking for meaning in the artworks is a fool's errand. Regardless of what the artist intended, audiences have been enjoying and attaching their own meanings to the paintings for decades, and despite what art snobs may think or hope for, it looks like they’ll be treasured for generations to come. And we think they should be.