If there’s one thing poker players love doing as much as playing poker, it’s hanging out with other poker players. In the last two or three years, there’s been a tsunami of “Meet-up” games; days when poker players within a particular circle get together to meet in person and play a bunch of poker.

This recent popularity can be directly traced to the rise of the poker vlog, and we can thank Andrew Neeme, Brad Owen, and “Trooper97” for kicking those off. But they weren’t the first meet-up game hosts.

The first meet-up game of which I’m aware was a one-table tournament on a bed in a suite of a Las Vegas hotel/casino that no longer exists. Do I have your attention?

In August of 1991, the annual “SIGGRAPH” conference was held in Las Vegas. SIGGRAPH is a gathering of people in the computer graphics field, and in those earliest days of the Internet, a handful of people in the graphics community were also hanging out online talking blackjack and poker. Before hanging out online was really a thing, or particularly easy. “Hey, we’re going to be in Vegas, we should meet in person.” A few of them got together in Vegas and swapped gambling tips; most of them related to “advantage play” in casinos (beating the house at its own game).

But they had so much fun they decided to do it again the next year, despite it being August in Las Vegas. Online, they were hanging out on “Usenet,” a precursor to the online forums which exist everywhere today. Usenet used period-delimited names to create a hierarchical tree of meeting places. These poker/blackjack players chatted in a group called rec.gambling (“rec” for “recreation”). It made sense then, that they named their gathering the Big August Rec Gambling Excursion—BARGE. They met in a suite at the Stardust Hotel/Casino (RIP) occupied by one of their group; a semi-professional blackjack card counter who went by the nom de table of “Abdul Jalib M’Hall.”

A no-limit hold’em tournament became the crowning event of each BARGE, and by the time I attended my first BARGE at the Luxor Hotel/Casino in 1994, 60 people played in the valedictory tournament.

But what is BARGE? Well, it’s pretty much anything you want it to be. If a group of people decide they want to have sushi, they call and make a reservation; “Table for 35 please? Sure, I’ll hold.” For a while, the blackjack players would indulge in a “mass-barring” event; they’d all go to some casino where they didn’t care if they got thrown out, and begin openly and blatantly counting cards at the blackjack tables. “I have the count at +3… how many aces have come out?” Eventually the pit staff would lose their minds and bar entire tables full of BARGErs.

There was the “Craps Crawl.” Sometime around midnight one evening (BARGE is an extended weekend, or more) a group of r00lers would go to a craps table at some unsuspecting casino and begin betting the “don’t”—that the person throwing the dice will lose their bet. “Betting the don’t” is considered poor form at a craps table because serious craps players (is that an oxymoron?) feel it brings bad juju to the table. The only worse etiquette violation is to verbalize that hope. The craps crawlers would shout, “C’mon seven!”

The night before the big no-limit hold’em tournament, there is a banquet, which has come to have some notable speakers, such as Arnold Snyder and Stanford Wong (both blackjack legends), and poker luminaries including Mike Caro, David Sklansky, Mason Malmuth, and Steve Lipscomb, who gave the assembled multitude a sneak peek at a televised poker tournament series he was about to launch. It was to be called the “World Poker Tour.” I don’t know how that enterprise worked out…

After the banquet plates are cleared away, there are heated discussions about who are the favorites in the next day’s big poker tournament. But there is never ever a “Calcutta” auction, in which people and/or consortia buy shares in individual players, because that would be illegal.

Finally, everybody retires to the poker room of the host casino for Reindeer Games. That is, poker games that you’ve never heard of, and the participants may have made up (or more likely, altered) on the fly. Some of the classics are “Binglaha,” which is normal Omaha, except after the flop betting, the person on the button rolls a die, which decides whether the game will be Omaha high-only, or Omaha high/low. Of course, it’s played pot-limit, because how else would you play it?

Then there’s Chowaha, which is regular limit hold’em (or Omaha, depending on the variant you’re playing) but it has three flops, two turns, and one river.

BARGE 2005. Actor and legendary geek Wil Wheaton was the banquet speaker. Here at the Reindeer Games, I’m explaining Chowaha to him.

I do recall Chris Ferguson building an astonishing chip castle from a couple of thousand dollars’ worth of $1 chips one year. For many years, BARGE was held at (then) Binion’s Horseshoe in downtown Las Vegas. One night, Nick Behnen—the husband of part-owner Becky Binion—got into the BARGE mix and a particularly wild and crazy no-limit hold’em cash game. As the hours went by and participants got hungry, he didn’t want the game to end, so he contacted the kitchen and asked them to bring out hamburgers and fixings for the entire crowd.

I am proud to say I actually won the BARGE main event in 1998 (there were 184 runners). Just as proudly, it was at Binion’s Horseshoe, using the official World Series of Poker chips, and was directed by future Poker Hall of Fame inductee, Jack McClelland. That was my first (and likely last) brush with poker tournament fame. I’ll never forget the next morning, walking into the coffee shop at Binion’s—they’d comped the entire gathering breakfast both days of the weekend—and getting a noticeable round of applause from BARGErs who had paused from their steak and eggs. Certainly one of the highlights of my poker career, maybe my life. 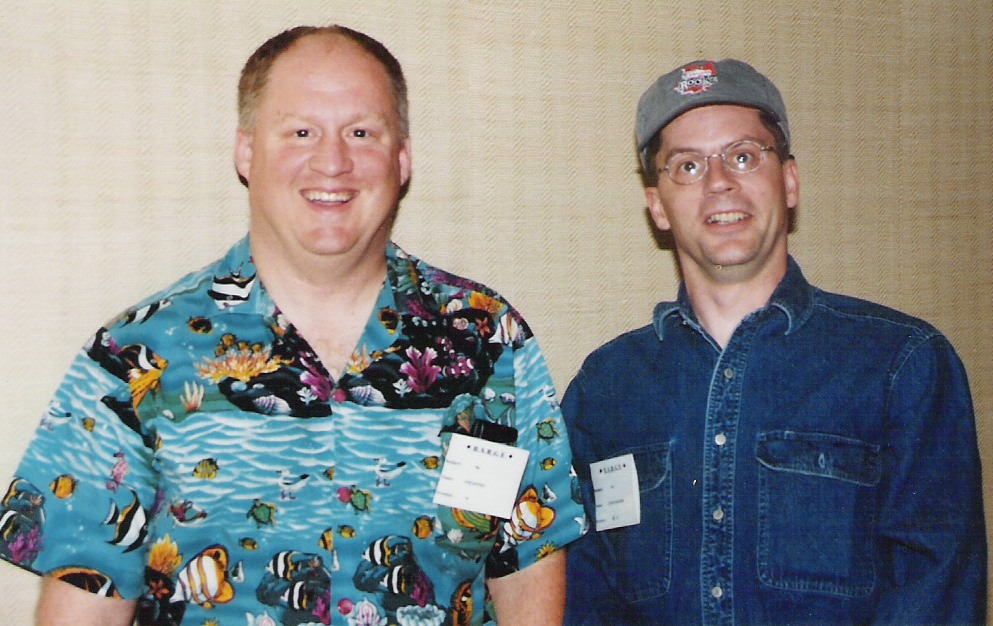 Finally, I’ll let you in on a little-known tidbit of poker trivia. Starting with the first (or zeroth) BARGE, depending on how you’re counting, the hold’em hand 55 got the nickname “Presto.” I don’t recall all the details of the origin story, but it 100% derived from the earliest BARGE and the aforementioned Abdul Jalib M’Hall. This nickname made it into general usage, and the hand itself became the name of a powerful poker media company. But few knew why 55 was called “Presto.” Now you know, and now you have a way to impress a small but experienced and savvy segment of the poker playing population. It’s best when you turn the hand up after it’s flopped a set and taken down a monster pot. Simply table the cards and say clearly, “Presto.”

Now, if, when you do that, somebody across the table raises an eyebrow and says, “Irwin?” then you’ve met a true BARGE O.G. Buy that person a beer and ask them for a story.

Want to be part of the fun? Jump over to www.barge.org and look for the sign-up link. What does it take to be part of BARGE? Well, just a desire to hang out with other poker players and over-tip dealers (splashing chips at new dealers coming into the box is pretty much obligatory).

And I promise you’ll have fun, because in the words of BARGE Rushmorian, Peter Secor, “There are no strangers here, just friends you haven't met yet.”