In my post about our WSOP champion Nahrain “2Rivers” Tamero, I told you about my friend Gwen, who’s a regular grinder on Global Poker. We met at the WSOP last year at a gathering of poker junkies at a Mexican restaurant. Over the guacamole, I learned that we’d grown up in the same D.C.-area suburb, and we both had a taste for Washington-grown music. It was the start of a great relationship.

Gwen is a perfectly normal poker player. She has a wife, a couple of kids, and a good job with colleagues she respects and enjoys. But like the families and colleagues of many poker junkies, they don’t fully get this poker thing. So sometimes she needs another outlet to share her poker accomplishments, like, in real-time. That’s why I got this text a week ago:

“In the money in GOAT tourney!”

Unfortunately, I wasn’t near my computer, so I couldn’t jump on and sweat her. I sent her a quick reply, “Gogogogo. Take it Down!” and went about my business.

A couple of days later, I asked her how she’d gotten to that point.

“I really wanted to play the big one this week. It was GOAT 24-H, NLHE Deep Stack with a SC 15k guarantee. It started at 5:30pm – we ended up with 225 players. I just played snug until we burst the bubble. I know it doesn’t sound very interesting, but for most of the tournament, I just waited until I had good cards and then put chips in the pot. Once the bubble burst, I started to get a bit more creative.”

Were there any close calls?

“Oh yeah – one time, after we were in the money, I was pretty sure I was out. I came downstairs to eat some dinner, and had the iPad next to me on the kitchen table. A super-shorty shoved, I came over the top with pocket tens, and then somebody who had me covered shoved over both of us. Turned out I was up against AK and QQ.”

“’Blech’ I said, and walked over to the stove to get more food. My wife asked if I was out, and I said yeah. I came back to the iPad to see how much I’d cashed for. I had another hand! Turns out the queens was the shorty, and the AK the big stack. Board ran out all small. I actually had more chips than I started with, even after the queens tripled up.”

“Anyway, we reached a point where I was 4/13. I thought, ‘This could be the one.’ I snugged up more and focused on the final table.”

That’s when I got this text: 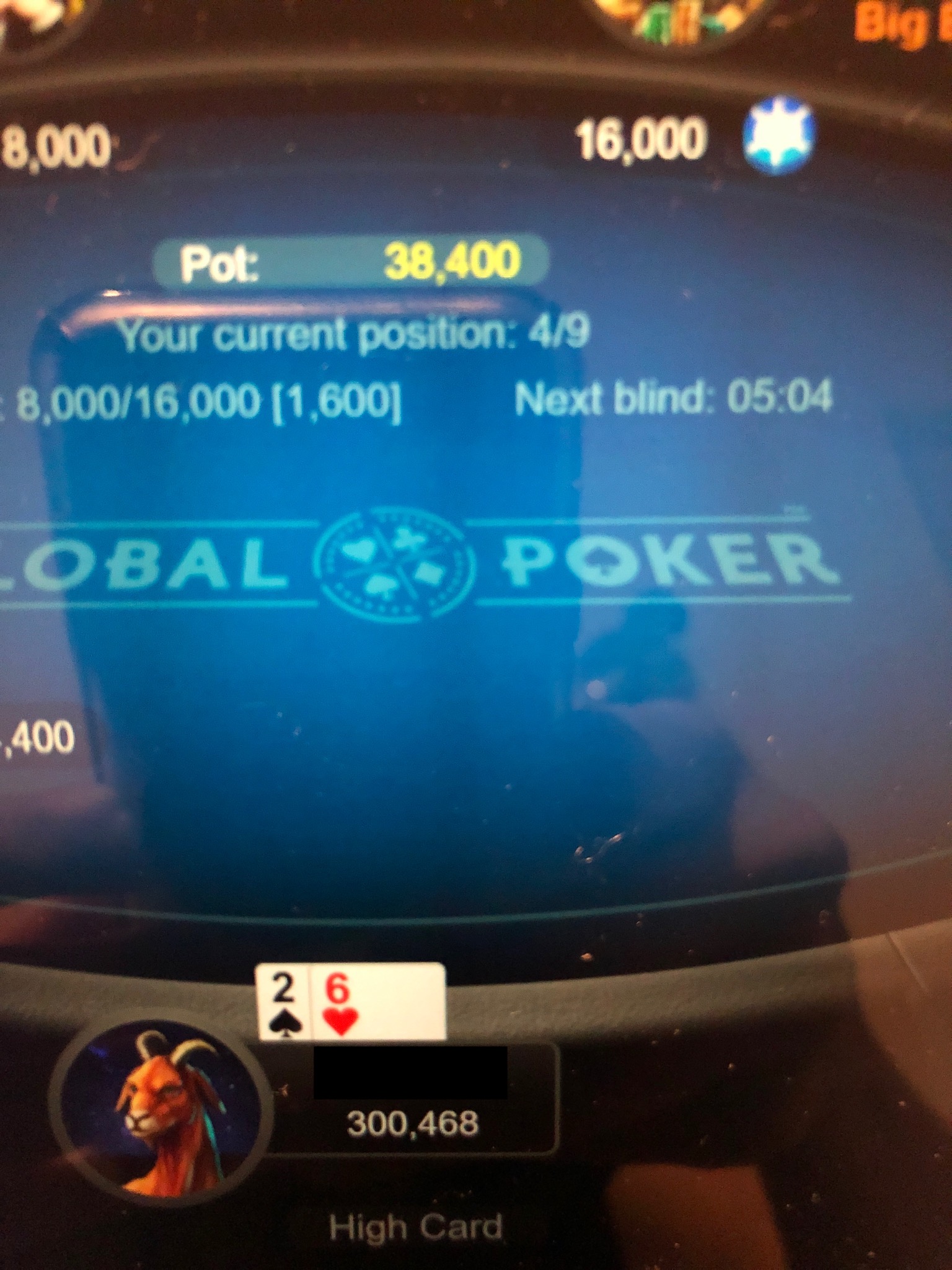 Then a little bit later: 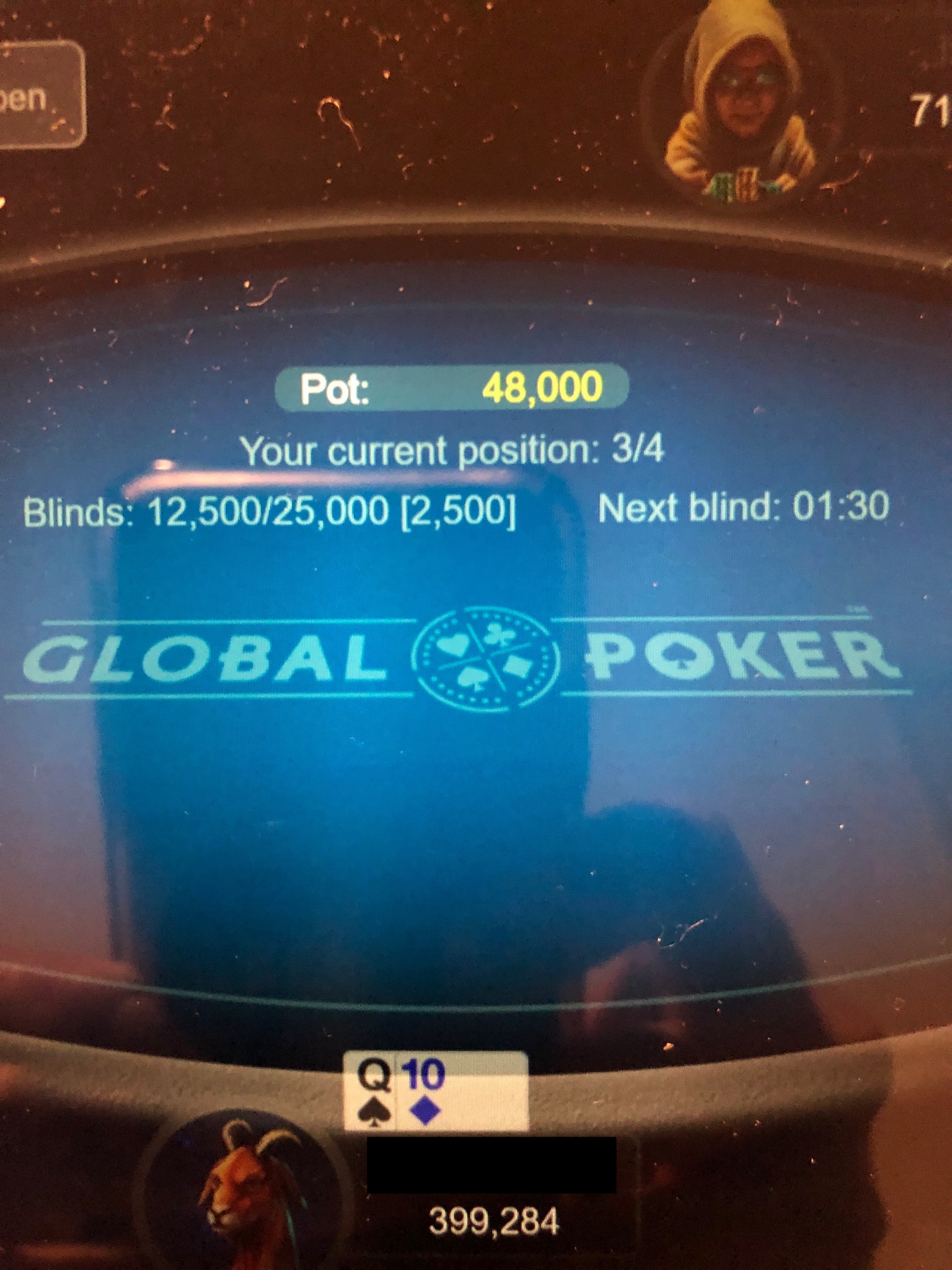 Well, this was getting intense. So let’s hold that tension for a moment and go back to the beginning. The very beginning.

Gwen—who goes by ‘CharlieWest’ on Global Poker—started playing on Global in 2016. “It was a really small community back then. I got to know almost everybody that I played against. I knew who played well, who didn’t. I knew the nice people and the jerks. It was almost like a home game community that had moved online. I played mostly ring games and a lot of sit-and-go’s.”

“When did you book your first serious tournament win on Global?”

Speaking of competing against the big boys and big girls, back to the text thread. My phone pinged this:

From our subsequent conversation: “We were four-handed. I folded some piece of trash—J6o or whatever. Then I picked up the phone to text you. When I looked back at my monitor, there was a massive three-way all-in, which the chip leader won. He took out two other players and I was heads-up, albeit with a 2:3 chip disadvantage.”

“So that’s when I texted you again to say we were heads-up. And got that lovely text back from you.”

About that text I sent back. When the “Heads-up!” text came in, I knew it was time for tough love—I went into coaching mode:

“💜Now put the phone down and concentrate.”

I didn’t say this in the text, but I didn’t want to hear from her again until somebody had all the chips.

Pretty soon, somebody had all the chips. 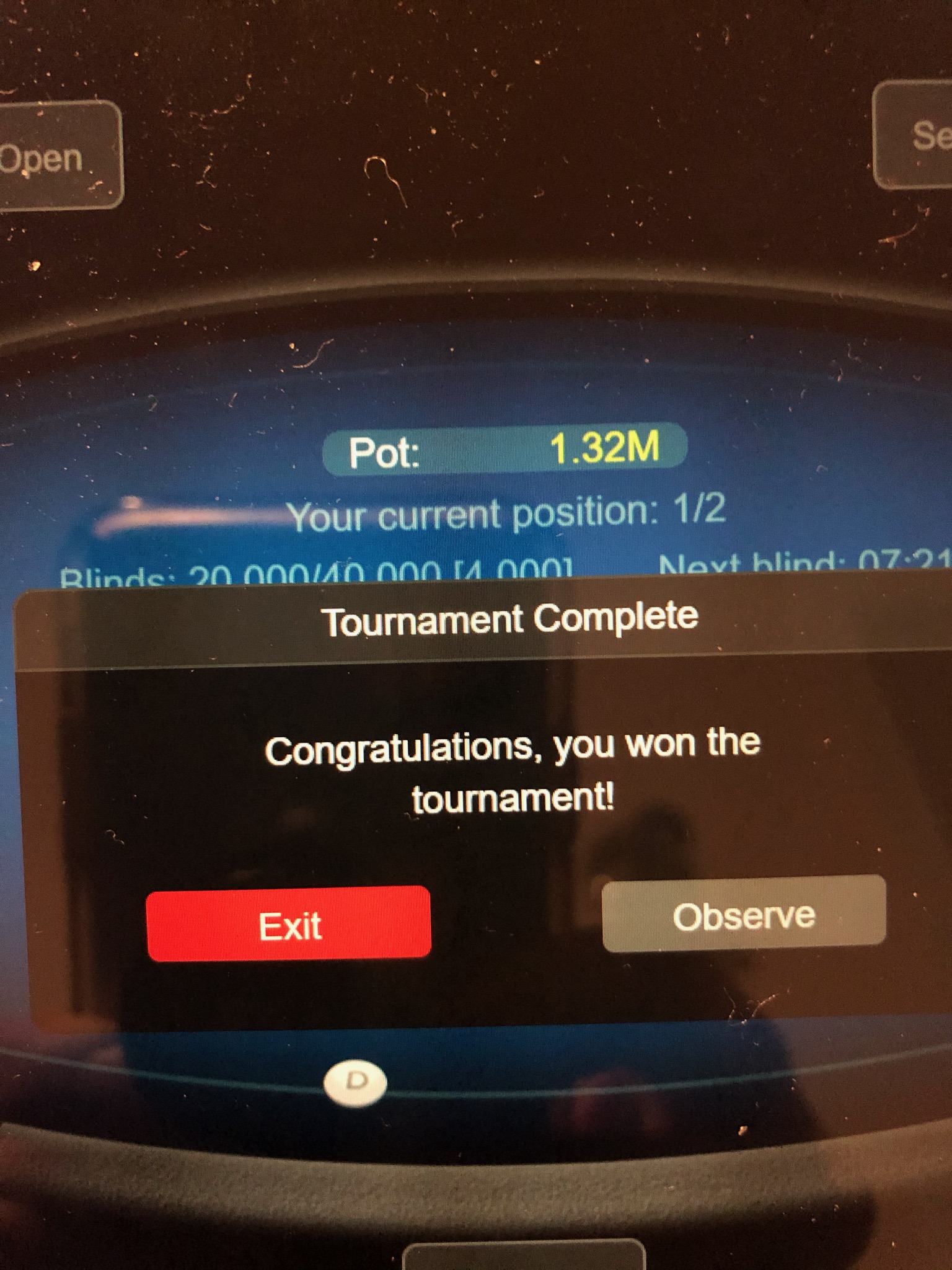 “First, I put the phone down as you’d instructed. Then I went into Baddha Konasana [butterfly pose – sitting knees out, feet together] and took a couple of deep breaths. I started focusing on every move he made. How his bet sizes correlated to what he was showing down.”

“He bet, but based on his previous sizings, I was pretty sure he didn’t have it. I had second pair with a good kicker and I thought it was time to put him to the test, so I just ripped it in. I can’t remember what he had, but I recall being surprised he had called. Anyway, he didn’t get there, and I had all the chips.”

“Ran downstairs with my iPad whooping and hollering. My daughter said, ‘Did you win a tournament or something? If so, can I have the hoodie?’ No way girl’s getting the hoodie – that’s for me. It’s all about the merch.”

“Well, I won that tournament on Saturday, so the next day was Sunday, which is known in my house as, ‘Mom’s Tournament Day’.” I didn’t really think about the win from the night before. I just got up, ate breakfast, and looked at the tournament schedule. It was like, ‘Another day at the poker office.’ Does that make me a real grinder?”

“Aw, you were a real grinder before you won that tournament. But now you’re not just my friend Gwen. You’re Gwen the GOAT.”

Lee Jones has been in the poker industry for over 30 years. He writes at the Global Poker blog, plays poker every chance he gets, and coaches poker. You can contact him at www.leejones.com.​