A lot of water has flowed under the bridge since the late 1980s, when I started playing Limit Hold’em (LHE) in San Jose. I’ve forgotten most of the details. I won and lost a lot of small pots, won and lost a few huge ones. But many of the faces are as clear to me as if I’d walked out of Garden City an hour ago. Frank the Magician and Chinese Elvis. Jimmy Y; they said he’d made absurd amounts of money turning Santa Clara County dirt into Silicon Valley gold. I don’t know if it was true or not, but he always smiled and said hi to me. Heck, he smiled and said hi to everybody. 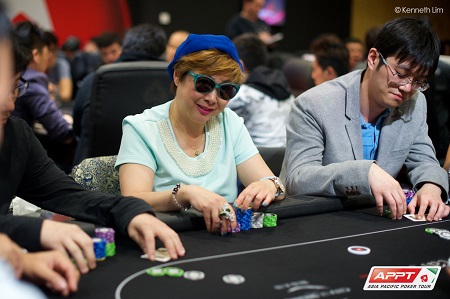 Then there was this little Chinese lady about five-foot-nothing. She was there all the time, sitting in a $6–12 LHE game. She was as much a part of the place as the tables and overhead lights. I never heard her say anything other than “Call,” “Two bets,” and “Nuts.” Everybody at Garden City and Bay 101 knew her, and everybody called her “Mama.” I didn’t know anything else about her, until yesterday, and therein lies a story.

But let me back up. I recently bumped into J.J. Liu on social media. If you don’t know the name J.J. Liu, look her up. She has $3.3 million in tournament winnings, and is ranked 7th in all-time winnings for female players. She’s also been around the game forever; her first WSOP cash was in 1996, essentially a quarter century ago. Her most recent WSOP cash was three months ago.

I knew J.J. a little bit from the old San Jose days. She was a regular in the same clubs where I played and we knew each other enough to wave when we passed. I thought it would be fun to interview her three decades later and catch up.

“I started playing at the Cameo Club; I was living in Palo Alto and it was right down the street from me. In fact, Phil Hellmuth was a neighbor of mine. His kids and my kids were in the same school. He was a youth soccer coach and I was the soccer referee.” Bet you didn’t read that in Card Player.

“I had time on my hands so I started playing lowball, and eventually limit hold’em. It was probably $2/4 limit hold’em, you know—the lowest stakes possible. But I worked my way up to the bigger games; I ended up playing the $100/200 limit hold’em, with Phil and the other guys. I guess that’s about the time I met you.”

That is indeed about the time J.J. and I first met. But I assure you that it wasn’t because I was sitting at the $100/200 LHE table.

“Everybody was going to the WSOP, so I decided to go and see what it was all about. I played one event—$500 limit hold’em I think—and I bubbled it. I was so upset. So I hung around and signed up for a $3k limit hold’em event.”

“But then all the tournaments became no-limit hold’em. I had no idea how to play no-limit hold’em, it was a completely different game. I’d buy into satellites, but couldn’t win a seat. So many tournaments I could have just bought into for the number of satellites I lost. But after a while I figured it out.”

“The 1999 WSOP Main Event, I was the big chip leader for a long time. But then I ran into Noel Furlong [who ultimately won the whole thing] and he took all my chips over a few hands. I basically bubbled the event. I went back to my hotel room and cried.”

Needless to say, J.J. picked herself up and has spent the past 20 years crushing poker tournaments all over the world. And putting her financial skills to use elsewhere.

“When the recession hit in Vegas, I flipped houses. I’d go to the courthouse and buy them, then ultimately resell them. I probably flipped 200 houses.”

All those tournament wins were just icing on the real-estate cake, I guess. I noted that she’d cashed in five events during the 2020 WSOP, which was held online.

“I have houses in Atlanta and Las Vegas. I was out in Las Vegas with my daughter and decided to play some of the events. I miss the social aspects of live poker, but it sure is convenient to just sit at home and play.”

Which led me to a question I’ve wanted to ask for years. Whenever you see a picture of J.J. during a tournament, she’s wearing a hat, sometimes plain, sometimes haute couture. On the video camera, she laughed.

“I didn’t want to do my hair. I would just put a hat on my head and go to the casino. But then I’d go shopping and see hats; pretty soon I had a large collection.”

And what is she up to these days?

“I still like to play; like I did for the WSOP. I do commercial real estate here in the Atlanta area. My family is still in Palo Alto, so I go back there to visit. My mother is 93 years old and she loves poker—she still plays.”

Did her mom ever play casino poker, I asked.

“She’s a winning player. I took her on a poker cruise and bought her into a tournament. She busted me in the tournament—busted me!”

A big thank you to J.J. Liu for a quick recap of her poker career. I hope she’s putting big numbers up on Hendon Mob for another 25 years. And a special thanks for filling in the rest of the story about “Mama”—the legend of the San Jose $6–12 LHE games.