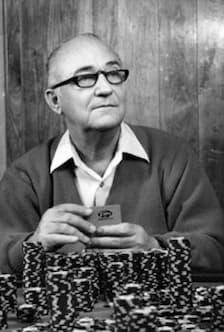 You want stories? I got a million stories. Grab coffee or a beer and settle in…

If you know who Johnny Moss was, you can just keep reading. If you don’t, well, step away from this article for a minute and read up on him. He was a Texas road gambler who won the World Series of Poker main event twice (in 1971 and 1974). But in 1970, the first year they held the WSOP, they voted for the best player. The story goes that on the first ballot, everybody for himself, so Jack Binion told them all they had to vote for somebody else. Johnny Moss won.

They called him the Grand Old Man of poker, and of all the poker nicknames I’ve ever heard, this is one of the best.

I only encountered Johnny Moss once, but that was on purpose.

It was the summer of 1994. I was on one of my all-too-infrequent pilgrimages to Las Vegas with a couple of friends and we were hanging out at Binion’s Horseshoe. Binion’s was one of the centers of the poker universe back then. The Mirage was the other, but Binion’s was more suited to our taste. To be fair, it was also more suited to our bankrolls, both poker and real-life bankrolls. The hotel was grim, at best, but it was half the cost of the Mirage (maybe less). The poker room was a few steps from the elevators (both of them). In the coffee shop, for seven or eight bucks you could get a breakfast that would hold you until dinner. And the waitress called you “Hon”. When you got peckish toward evening, there was the deli. It was a legit deli – like some New Yorker had wandered into Binion’s and decided not to leave. A 3” high pastrami sandwich, with a pickle the size of your fist, was $5.99. They had Dr. Brown’s Black Cherry soda, too.

In short, there was no reason to leave Binion’s, which was probably just as well, because that area of downtown was not particularly safe. This was before the renovation that became the Fremont Street Experience. Then it was just Fremont Street and you didn’t wander around outside Binion’s without a good excuse.

So there we were, grinding away in our $2/4 and $3/6 limit hold’em games. I’m sure the rake was near unbeatable, but what did we care? We were playing poker in Mecca, there was no curfew, and we quit the game only when we were exhausted, starving, and/or broke.

This is where I flirted with the last of these.

I glanced up from my game, squinted through the smoke, and whispered to my buddy, “Ken. It’s Johnny Moss.” “No. Really?” “Yeah, it’s him.” 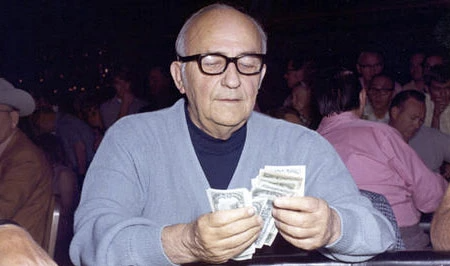 There in the $20/40 limit hold’em game sat Johnny Moss. Johnny sat there a lot during those days. He was living in the hotel, a long-time guest of the Binion family. They probably bought his chips for him too – the days when he was one of the most feared players in the game were long over. But he could no more stop playing poker than Keith Richards could stop playing guitar, so there he was in the $20/40 game. He was no doubt fodder for the serious players – the $20/40 was the biggest game in the room – but he served a dual purpose. Not only was he was unlikely to beat the game, but more importantly to them, his very presence brought a constant stream of people who wanted to sit in a game with him. People who would undoubtedly be terribly outmatched by the $20/40 regulars.

That list of people was about to include me.

“I’m gonna go over and sit in that game.”

Ken, bless him, tried to talk some sense into me.

If it was good enough for Tony Holden…

“That’s fine.” Of course, it wasn’t, but I wasn’t quitting now. I bought $400 in nickels from her – four little stacks that didn’t even fill the rack. It also represented 60% of the cash that had to last me through the rest of the trip. I found my seat – I can still visualize where we were in the room, and where Johnny was sitting, across from me. One or two old guys nodded to me – probably the way they say grace over the Thanksgiving turkey.

And I started folding. I don’t think I played a single hand for 30 minutes, just posted the blinds. But man, I didn’t care. I was in a poker game. With. Johnny. Moss. I glanced over and saw Ken looking at me. I knew, deep in my heart, that he was dying of jealousy, and that made it all okay. 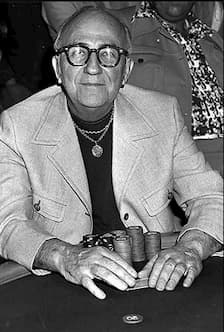 I wish I could tell you the details of the hand I played “with” Johnny. I had an ace, probably a pretty good one given that I played it in the first place. I don’t remember the preflop action. I remember an ace on the flop. It checked to me and I bet. Johnny and one other guy called. Whoa – Johnny Moss and I had money in the same pot.

The turn was whatever. They checked and I bet $40. Johnny folded, then the other guy folded. The dealer pushed me the pot. Somehow I remembered to tip him – I think I gave him $2. Miraculously, I stacked the chips without creating a giant mess. I think I was up $30-something, but don’t really remember. I do know that I had a small profit. Probably two days’ worth of meals at the Horseshoe, honestly.

I folded for another 15 minutes, praying for the blinds to come around a couple of times. Then I safely folded my under-the-gun hand and racked up my chips. I don’t remember if Johnny acknowledged me – I know a couple of guys nodded. They were probably glad to see me gone, hoping I’d be replaced by a drunk tourist with three racks of chips.

I got back into the $3/6 game. Ken confirmed that I still had food and poker money, and asked me how it was. “I won a pot off Johnny.” That’s all I needed to say, and all he needed to hear.

You ever get a chance to sit in a game with one of your heroes, I encourage you to do it. It’s hard these days because usually those heroes are playing nosebleed stakes, whether it’s cash or tournaments. But if the opportunity arises, go for it. Maybe a quarter century later, you’ll be telling people about that time you sat with…

Lee Jones plays poker every chance he gets, and coaches poker. You can contact him at www.leejones.com.