I just played a short PLO/8 session and thought it would be interesting to review some of the starting hands I played, and—more importantly—those I didn’t. I’ll just drop some starting hands here with a couple of sentences about each. 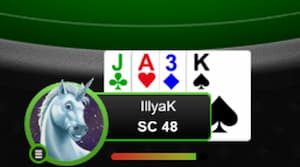 AKJ3 with no suits. This hand is actually not as strong as it initially looks. Any hand with an ace and all wheel or Broadway side cards is worth consideration, but the lack of a suit hurts. And it’s not even the A2 nut-low combo. But I did choose to play it, and got an above average flop. 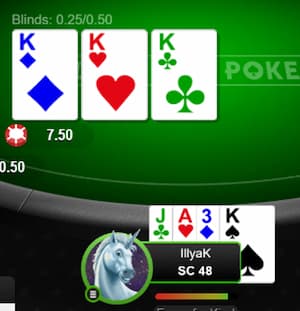 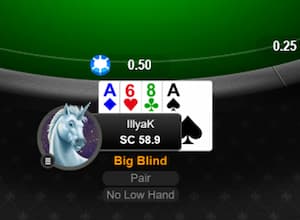 Hold’em players always sit up a little straighter when they see aces, but remember, while you get aces once every 220 hands in hold’em, you get them once every 40 hands in PLO (or PLO/8, of course). And there are good aces and bad aces. These are mediocre aces. No suits, and no Broadway or wheel cards. They will be difficult to play after the flop, and note if we flop a set, that’s one low card already. We may well be trying to win half the pot, which is never a good thing.

As played, two others wanted to mix it up for all the chips preflop, and with that opportunity I was happy to get it in. ProPokerTools told me that against reasonable ranges in both opponents’ hands, I had close to 40% all-in equity, which is a fine place to be three ways. But note this is nothing like the 80:20 kind of edge hold’em players are used to having with their aces when the chips go in preflop. 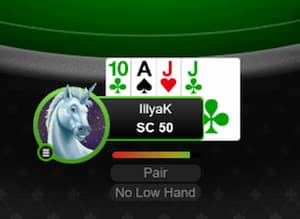 AJJT, with a suited jack-ten. Snap fold in PLO/8. We have zero opportunity to make a low, so we’re routinely trying to win half a pot. We don’t have a nut flush draw. And a pair of jacks is actually bad for us; we’d rather have a king or queen to build some monster Broadway wraps. Flopping a set of jacks in PLO/8 is nothing but trouble. Sure, there are some exquisite flops for this hand (think K-Q-J rainbow), but often you get yourself into expensive second-best situations, or are getting freerolled by somebody with a low. If you will fold this hand, you’ll be gaining a step on your opponents. 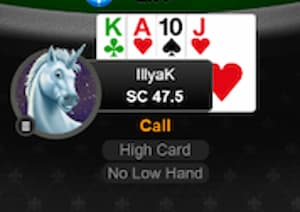 Much better, but not as good as you think. In PLO (high-only) this is an absolute premium hand. In PLO/8 you have no opportunity for low. The “good” news is if you smack the flop, it’s likely to be a lot of high cards, minimizing the probability of a low. Visualize a queen plus any Broadway card and you have a monster wrap. But if you get a 9h-8s-2h flop, that looks pretty good. You have the nut flush draw and an open-end straight draw. However, there are two to a low and you could quickly find yourself being freerolled on the turn.

I’m honestly not sure if this hand is playable in PLO/8 or not. I would play it only for one bet and definitely only in late position. It would not be terrible to simply fold this preflop. It would be malpractice to fold it preflop in PLO high. 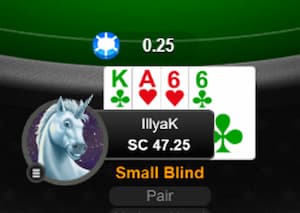 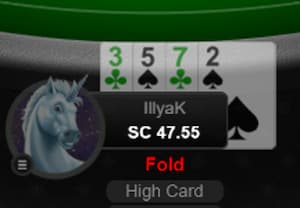 See how this hand is grayed out? That’s because I folded it. There’s nothing to see here, folks; move along. There are certainly good flops for this hand, but not near enough to justify playing them. And don’t get me started about 7- and 5-high flushes in PLO. That’s just a good way to lose your chips. 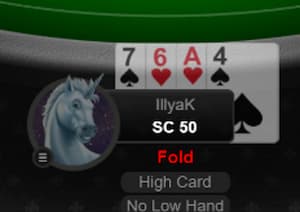 Another hand that is always playable in PLO (high-only) but an easy fold in PLO/8. The cards that make your nut straights (deuces through eights) also guarantee low hands that have you clawing for half the pot. Next case. 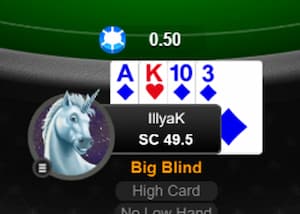 This hand has one of the key features you’re looking for in PLO/8 hands; an ace plus nothing but Broadway and wheel. It’d be nicer to have the three be a deuce. And it’d be nice if it were the deuce of hearts instead of diamonds, but you can’t always get what you want.* What you’re really looking for in the flop is the deuce of diamonds. Be careful about proceeding with a low draw, and certainly don’t proceed unless you have a nut-high draw to go with it. 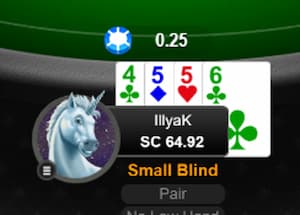 Easy fold. This hand is only marginally playable in PLO high, under only the right circumstances. In PLO/8, it’s a dumpster fire waiting to happen. 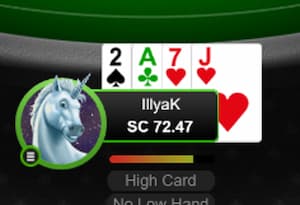 Don’t be seduced by the ace-deuce combo. This is another easy fold. No flush draw (jack-high flush draws aren’t flush draws in PLO), no back-up wheel cards. Fold this one quickly. 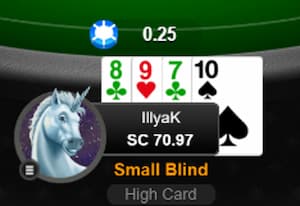 Another fine PLO hand that gets PLO/8 players in trouble. All your nut straights produce a handful of low cards that mean you’re trying to win half a pot, which is losing. If there aren’t low cards on the board, then your straights are the “ignorant” end and you routinely lose to Broadway card straights. For instance, the board is 5-6-J-Q-K. You have the T9 straight, but lose to AT, which will be there frequently. 5-6-J-Q-4? Great, you have the nut straight, but you’re never winning the whole pot because somebody has a low better than 8-7.

PLO/8 is a great game and I’ll be talking more about it. But you have to reset your perspective, both from hold’em and from PLO high-only. Concentrate on making nut hands and winning entire—not half—pots.

* But if you try, sometimes, you just might find, you get what you need.