Today we find out a little about one of our fantastic GP players. 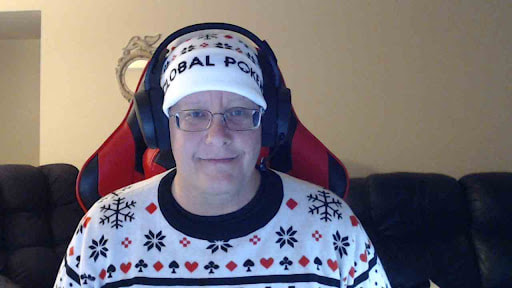 “Hoss” warm and cozy, rocking the Global Poker Christmas swag he won in the Eagle Cup V After Party.

I’ve been playing some sort of cards, basically all my life. Started with rummy, etc. then moved to euchre, pinochle and poker. Played nickel/dime/quarter dealer’s choice games all through high school and college on the weekends.

Started playing online poker in 2008, pre black-Friday on PokerStars. After black-Friday, I moved to HogWild and ACR. Been playing on Global since Dec 2016 and have had Global be my major volume site ever since.

I heard about Global from 2 people that I was working with at the time. Brian was the first to mention Global, then Dave (“Unsub”). Brian twisted my arm really good for a couple months before I joined.

Largest hit on Global wasn’t even a win, it was a 2nd place while streaming on globalpokerlive on Easter Sunday in 2020, for $5550. My best WIN on Global was day 1 of the 2021 Grizzly Games, when I won SC5037… there a pic of me with a check from it, out there somewhere on Global’s social media pages. 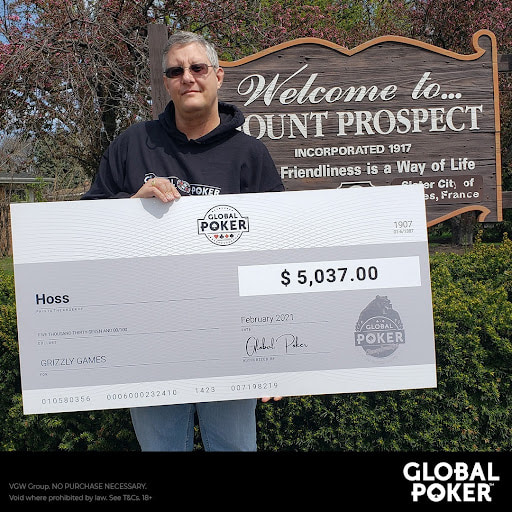 Way back in Feb 2021 from the Grizzly Games IV. “Hoss” was happy to receive the check, but had trouble sitting down when it was in his back pocket.

I have won double digit casino daily tournaments (none were HendonMob reported, even though 8 of them were in 5 different Las Vegas casinos), but have won two HPT (Heartland Poker Tour) side events. Chopped one in St Charles, MO (was listed as 2nd on HendonMob but walked out with the most $) and won a $2k maker outright in East Chicago, IL. I also have two WSOP cashes in Vegas.

My worst poker moment is what, in the long run, has made me a much better heads-up player, as I have put a lot of time and effort into working on my HU game due to it. I lost a trip to the Bahamas and a spot on the USA America’s Cup of Poker Team heads-up. But the study has paid dividends, as I’m 7 wins and 2 losses heads-up for Global trophies.

Instead of a worst beat (mine would honestly be later in this same tourney), how about I start off with a bad play by an opp that I was on the good end. In a live WSOP Circuit monster stack event at the Horseshoe in Hammond, IN, someone at my table had blinded down to 1.5bb. They finally shoved when folded to on the button, into my BB. Well, I called them before I even looked at my cards. They turned over AKo, I flipped over 28o. The duck floating on the river, KO’d the opp’s nut no-pair and the guy went on stone monkey tilt. Anyone in my streams knows, don’t mess with my wet bar napkins LOL 😂

Later in that tourney, near the bubble, we get a drunk guy that gets moved 3 to my left. Just within the last 30 min, the guy has had at least 6 vodka and redbulls, you can smell him a mile away and he’s 100% fully loaded. He had to get the last aggressive action on every street, every hand, and wouldn’t give in to anyone, regardless. He’s luckboxing everyone and if he’s not the chip leader, he’s minimum top 3, and I’m sitting on a top 20 stack myself. He opens UTG, folds to me, I look at my cards and 3-bet big, knowing he’s coming back over the top. His shove almost beat my 3-bet into the pot and with me holding AA, I sure as hell am not folding. My AA vs his ATC range, I’m an 85% favorite to have a massive chip lead with the bubble looming within 10-15 min. He turns over 45s, flop, 367.

When I’m not playing poker, I’m either watching sports live or on tv, playing golf or outside walking. Take one look at me, you probably wouldn’t guess I’ve walked over a marathon within a day before, but have the Fitbit numbers to prove it. 50,126 steps, 26.64 miles. Not too bad considering I didn’t take a step that day until about noon.

Instead of renaming a tourney, I’d rename something that happens in every single tourney. Someone is going to bubble it and instead of the bubble, it’s the ‘Sorry About Your Luck’ spot.

Seriously, on a different tourney name, the one that’s earned, is the Daily Five Hundred should be The Husker, as HuskerBrad has absolutely killed that tourney. I’ve won it seven times, which IMO isn’t bad, but is a pittance compared to him.

Hoss’s self-included Number 11 (to which there was no question, but we love it!)

Craziest hand I was at the table for was in a daily tournament at Excalibur in Las Vegas. With a raise and a call, in front of me, when I looked down at 27o, was a very easy fold for me, but the fireworks were being setup for the grand finale. The flop was Ad Jd Ac. Flop checks through. Turn is Td and the turbo fuse on the fireworks was lit. Bet, raise, 3-bet, shove, call. The preflop raiser had As Ah, the preflop caller had Kd Qd. Quad aces loses to a royal.

Thanks “Hoss,” we love your work.